The weather outside was as hot as our leads at the Association of Woodworking & Furnishing Suppliers Fair July 19-22 in Las Vegas. 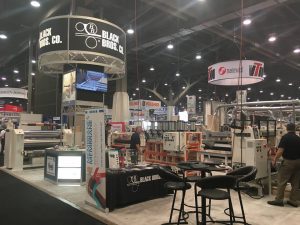 With temperatures hovering around 100 degrees on the Strip, AWFS 2017 attendees flocked to the air-conditioned Las Vegas Convention Center to learn everything there is to know about the woodworking industry.

Our experienced Black Bros. Co. sales team had a great time providing information and solutions to hundreds of industry professionals who visited our booth. We welcomed in attendees from across the country, and as far away as Europe, South America and Asia.

Black Bros. Co. had four machines on display at the show, each tailored to a specific area of expertise in the roll coating and laminating industry. AWFS served as the debut of our recently-designed Multi-Nip Rotary Pneumatic Press. Designed for the Engineered Wood Flooring market, the multi-nip uses air pressure and a combination of chrome and rubber rolls to press together the different plies of wood for hardwood flooring.

Paired with the Multi-Nip in an abbreviated line was our tried-and-true 775 Holt Melt Roll Coater. In the display, we had samples of what the layers of wood would look like once sent through the hot melt roll coater, and then more samples simulating what it would look like after the wood was sent through the Multi-Nip. We had many visitors to our booth very interested in this set-up.

Also on display was our TB-60 Hot Roll Laminator. We had good interest from many new customers, but also older owners who are still running their original TB-60 before Black Bros. Co. bought the machine rights from Monco in 1997. Now stretching into at least their third decade, those original machines are a testament to the TB-60’s quality and durability when customers are looking for production of decorative paper laminated panels. 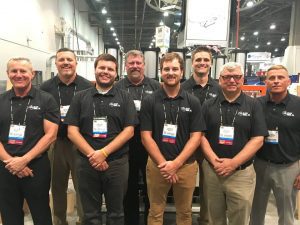 Of course, one of our most well-known and popular machines – which has been a workhorse in facilities across the globe for decades – the 22-D 875 Adhesive Spreader and Roll Coater, also made an appearance in Las Vegas.

If you were unable to attend this year’s AWFS Fair in Las Vegas, Black Bros. Co. can still help you find what you’re looking for in the roll coating and laminating industry. Give us a call today at (815)-539-7456.